Some of you may know that my daughter was recently married. Boy, I had no idea how much work it was to plan a wedding! I have so much empathy for each and every one of you that have already had the privilege to undertake such a task and I'll be praying for those of you currently in the process! Since as I still have 4 more kiddos at home, two of which are daughters, I'm hoping a wedding is similar to pregnancy. I'm banking on the idea that I'll forget how hard it is before the next one comes along. Anyhow, I'm currently retired from wedding planning, at least for another few good years. The day following the big shindig, my husband had arranged for the two of to escape the chaos of what our house had become during the wedding process and retreat to the quiet, peaceful setting of Fall in the mountains to recover for 24 hours. I cannot even begin to tell you how very much needed that was. As we were packing up, he asked me what I wanted to do while we were there to which I replied, "SEW!"
He packed up all of my sewing supplies. I picked a project I wanted to begin and hopefully complete while we were there and we were off!
Upon arrival, I quickly set up my sewing station and put the pedal to the metal! Okay, pedal to the wood, as in wood floor, but you know what I mean. 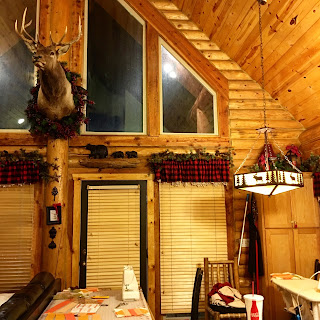 Why is sewing so much more relaxing when it's not taking place in your own sewing room? I'm guessing it's because you don't have piles of fabric, unfinished projects, half empty coke cups, and chocolate wrappers lying around. OH! Is that just me?

It was a beautiful setting and I sewed to my little hearts content. Project Pumpkins was going to be completed by 1600 hours on Sunday! 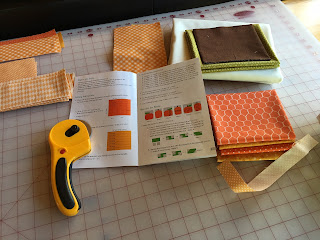 This is such a cute, fun pattern by Cluck Cluck Sew. The pumpkins come together quickly and easily and are SEW adorable! 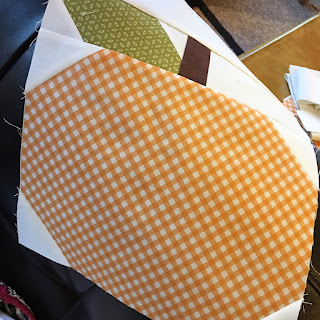 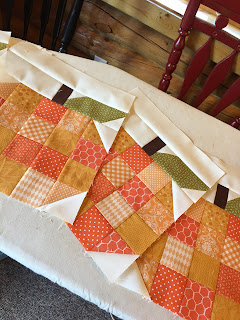 I finished 2/3 of the blocks the first day! I have yet to decide if forgetting your seam ripper is a good thing or a bad thing. I may or may not have let a few unmatched seams slide due to missing the little "correct all sewing tool" that usually accompanies me wherever I sew. Although, I did learn that a pair of Gingher scissors, with a lot of patience, a careful eye and tedious work can substitute as a seam ripper on leaves that are sewn on backwards. Just sayin'.

The next morning was a race against the clock because I had the perfect setting to photograph my newly pieced quilt and I really wanted to take advantage of it. 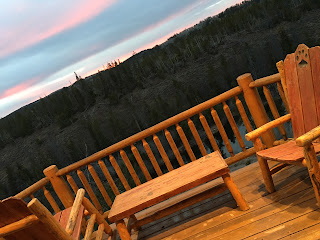 See what I'm talking about!?

A couple of movies, cokes and an apple pie later, voila! 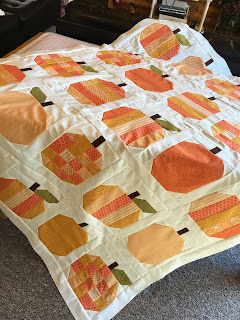 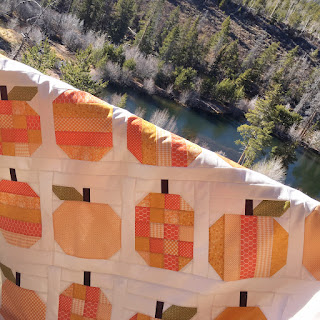 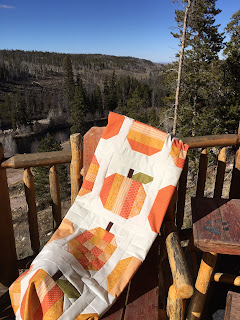 Sixteen Hundred Hours, quilt top done, photographed and loaded into the car for the ride home, where it will undoubtedly reside for a spell before quilting, binding, washing and cuddling, because the aftermath of the wedding has exploded in my living room.

Yes, this quilt top can easily be completed in under 24 hours, That 24 hours also includes one, maybe two baths, a relaxing drive through the mountains, a movie or two, a good night's rest that you haven't had in months if you just pulled off a wedding, but mostly just sewing.

If you're ready to dive into this pumpkin patch, we've assembled kits for you. The kit includes the pattern and all of the fabric required to make your very own Pumpkins Quilt as pictured.

Welcome to our Blog!